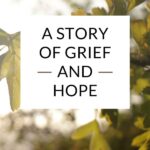 One of the challenging things about blogging is navigating that fine line between which stories to share, and which to keep private.

It’s always been a tough one for me because I’m passionate about storytelling. I believe that when we share our lives with others, we give the gift of new ideas.

I’ve experienced this firsthand many times. Other people have generously shared their stories with me (about travel, minimalism, and so much more) and in doing so, they planted seeds in my mind. Eventually, some of these seeds blossomed into new and beautiful ideas. A few even changed the course of my life.

This is why I’ve been so open over the years. I’ve told the embarrassing story of my journey from shopaholic to minimalist, and the painful lessons I’ve learned about self-acceptance and self-worth. I’ve chosen to be vulnerable because I genuinely believe that sharing is worthwhile.

I think about it every year when November comes around. I can feel something pulling at my heart, and there’s a heaviness in the air, the weight of my unspoken truth.

But then fear gets in the way. It’s all too much and besides—this is a blog about minimalist living. Who wants to hear my story of grief and loss?

On the surface, the two topics might seem unrelated, but with each passing year, I’ve learned that this couldn’t be further from the truth. Minimalism, decluttering, letting go … loss, fear, grief. It’s all intertwined, part of the tangled web that we call life.

So the desire to share this story has been getting stronger and stronger, and then my beloved grandfather passed away last weekend. I have always used writing as a way of mending my broken heart, so now seems like as good a time as any to finally open up.

The following is the story of my brother’s passing in November 2004. It’s everything I know about grief but also hope. It was first published in a small magazine (Holl & Lane—now known as Kindred), but I’ve never shared it so publicly before.

I hope that it … inspires you? Or comforts you? Honestly, I’m not sure the right words or what I’m hoping to achieve with this blog post except, perhaps selfishly, to further my own healing.

Or maybe, just maybe, it will plant a seed in your heart that will eventually blossom, and change the course of your own beautiful journey.

Thank you for holding space and reading my story.

A Story Of Grief + Hope

The phone rang, jolting me awake.

I opened one eye and squinted at the clock; the blinking red digits told me it was not quite seven. It was early—and cold. I snuggled deeper under my blanket and tried to tune out the noise, but the phone continued ringing, stubbornly refusing to let return to my dreams.

Reluctantly, I crawled out of bed and made my way down the hall towards the offending noise.

“Yeah,” I answered as I picked up the phone, expecting to hear my mom’s voice on the other end. We lived together, but she’d spent the night with a friend; I assumed she was ringing to make sure I was awake for my early shift waiting tables. We both worked at the same restaurant.

I was surprised by the strange voice—and then instantly annoyed. Who was calling this early on a Sunday morning? Surely not a telemarketer?

“Who is this?” I snapped down the line, making no attempt to hide my irritation.

His clear and steady voice replied with his name and rank, and my heart stopped in my chest.

I was speaking with a United States Marine.

Later on, I would learn it wasn’t supposed to work this way. You usually don’t get a warning call, but my brother had listed my grandparents’ address as his next of kin. Much earlier that morning, well before sunrise, two Marines in dress blues had knocked on their front door.

But their knock went unanswered. My grandparents owned a restaurant and, despite being in their sixties, often worked late into the early morning.

So the two Marines had spent the night searching for my mother, and that’s why they were calling and looking for her, so very early on a Sunday morning.

They didn’t tell me this on the phone—but deep down I knew why he was calling.

I told him I would get my mother, and we arranged to meet at nine.

Nothing else was said, and I hung up the phone, letting my hand linger on the receiver. I stared at it for a few minutes; it didn’t feel like my hand. Instead, it felt foreign and out of place, just like this moment. I felt like an actor, but I was in the wrong scene.

After a few minutes that felt like a lifetime, I took a deep breath, picked up the receiver, and dialled my mom’s number. It rang several times before she answered.

“Mom. I’m coming to get you. A Marine just called, and he’ll be here shortly.”

I heard her voice catch, and in that instant, I knew that she knew too. There was a moment of silence, and then she hung up the phone.

I dressed quickly and hurried out the door, pausing for a moment before getting in my car. I looked down the street at our sleepy, one road town and took note of the brightly coloured American flags decorating most homes. It felt vaguely staged.

I opened the door and got in my car.

When I arrived to collect my mom, she was already outside waiting. It was November and she was bundled up against the cold, but I’m pretty sure that underneath her coat she was still wearing her pyjamas.

She opened the door and stared at me. I couldn’t face her; I turned away and put the car in gear. We drove home without speaking.

The silence only continued as we waited. I think we were both afraid that saying our fears out loud would make them real, so we sat and said nothing until we heard a knock on the front door at precisely 9 o’clock.

I opened it and standing before us were two immaculately dressed United States Marines. They didn’t attempt to enter. Instead, they stayed on the street and faced us.

We stood in the doorway and stared back at them.

Then there was a pause—a tiny moment in time—before they started speaking.

That instant defines me. I was one person, and then a second later, I was someone else.

On that Sunday morning, the 14th of November 2004, I learned that my baby brother, Corporal Dale A. Burger Jr., was never coming home.

When I was a child, I injured my elbow jumping off a table. I was pretending to be a circus lion jumping through a flaming hoop, but when I landed on the cement floor of my best friend’s basement, my elbow locked and something happened that led to several months in a giant plaster cast.

Of course, nearly thirty years later, my arm is fully healed, but I’m not quite the same as I was before the accident. It’s a great party trick actually. My left arm extends, quite grotesquely, well beyond a flat 180 degrees. I’m no doctor, but I’m pretty sure that if you looked closely at my bones, you’d see that they never grew back quite the same.

In this same way, Dale’s death reshaped my heart. It was shattered into tiny pieces—and even though it has healed with time— it will never be quite the same.

Grief changes everyone differently, and while I will always feel like a part of me is missing, I am deeply grateful for the lessons that my loss has taught me.

Don’t wait, and don’t settle. Although unspoken, Dale’s final words to me were a reminder to take chances, to face my fears, and to truly love my life.

In the past few decades, I’ve moved abroad, I’ve travelled around the world, and I’ve gotten married (twice). I’ve had great success, and I’ve also failed miserably, but you could never accuse me of not following my heart. I remind myself daily that it’s my duty to honour his life by choosing to live mine fully.

I’ve also learned that while my loss is painful, it is not unique.

Death is strangely humanising, and over the years, I’ve come to recognise the pain I know so well in the faces of women around the world. Sometimes it’s difficult because I feel emotion so strongly now—rarely a day goes by when a story of injustice or loss doesn’t bring me to tears—but still, I consider this deep compassion a blessing, not a curse.

But perhaps the most welcome, but surprising gift that Dale gave me when he passed is deep and unrelenting hope.

Of course, when we lost him, I was shaken to my very core. Believe it or not, I never saw it coming, despite the clear risk that came with his chosen profession.

For a long time after he died, I wondered how our family could be so unlucky? Of all the people, of all the soldiers—why did something so horrible happen to us?