Each month I create an #intentionplan because I strongly believe the key to creating a life you love is to show up every day and make a deliberate, intentional choice about how you want to live.

If you’re a regular reader, you might be a bit surprised to see this post because despite my promise of monthly updates … I haven’t posted an Intention Plan since June.

I won’t bore you with excuses but the short story is the past few months have been a roller coaster – a mix of big projects and tough choices – and on top of that, the longer I put off writing an update, the harder it became!! (This was a BIG lesson on procrastinating hard tasks!)

Anyway, a few days ago, I took my friend Daisy’s advice and made time to reset and focus on what’s important. It made a huge difference and I’ve decided this month is a fresh start – so what better time to dive in and finally write an update!? 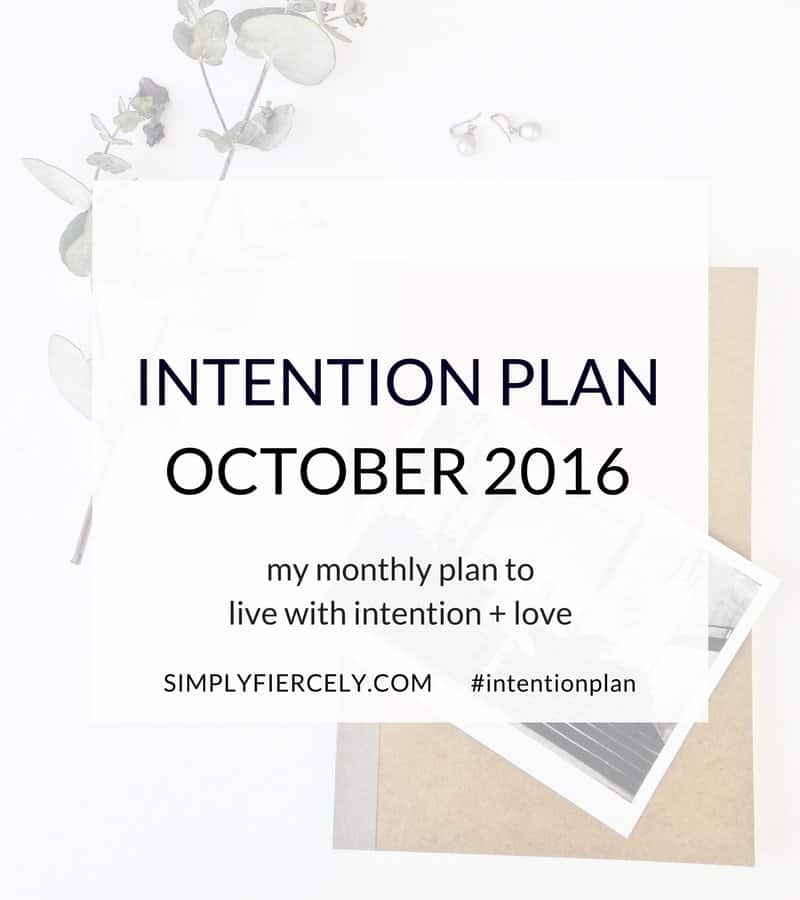 I wrote my last Intention Plan in Hawaii and shared my fear of returning home after seven months overseas and falling into an unhealthy ‘intention-less’ routine of eat, sleep, work repeat.

This is how I lived five years ago and since then, I’ve worked hard to turn my life around – but sometimes re-entry from long term travel can be tough on the soul, so I knew I needed to be careful.

With this in mind, my Intention Plan for the following month (or months as it turned out) was simply to live with intention and to remain vigilant of not losing myself when life got busy.

I’ll be honest – it hasn’t always been easy – but I’m happy (and dare I say proud) with the choices I’ve made in the past few months. A lot has happened, but here are the top three ways I’ve been living with intention and staying true to myself.

1. I DECIDED NOT TO RETURN TO FULL-TIME WORK

For a little background, in June last year (2015) I left my full-time job. I did this because (thanks to minimalism) I’ve significantly reduced my cost of living, meaning I was able to trade more money for more time to do things that matter to me.

I registered with a labour hire agency and started doing short-term, ad-hoc work; I no longer had the security of a regular paycheque but in exchange, I had the flexibility to work more or less depending on my needs.

Flash forward to this June.

I returned from overseas and registered with my agency, with the intention of continuing where I left off doing ad-hoc work, but it wasn’t long before I was given the opportunity to return to work full-time.

To be honest – I really wasn’t sure what to do.

Just because I didn’t need extra money right now didn’t mean I wouldn’t down the road. In the future, would I regret not earning and saving more when I had the chance?

Fear kicked in and I decide to give full-time hours a try … but after a few months, I noticed a change in myself.

As I worked longer hours and took on more responsibilities, I felt my energy and mood sliding downhill. Self-care, my relationships, and my personal projects (including this blog) went out the window.

It was clear my priorities were out of whack and my heart told me to work less … but my brain struggled with the decision. I know I’m privileged to be in this situation and many people would happily trade places with me. Was I being foolish or ungrateful by even considering working less?

Ultimately, I realised I had to be true to myself.

It’s easy to let guilt and external pressure influence our decisions, but it doesn’t mean it’s right. You might not agree with me, but when I reflected on my personal vision and values, I knew working less was the right decision for me.

I’m now working part-time and experimenting with work that feels meaningful to me – which brings me to my next two points!?

2. I WROTE AND PUBLISHED AN E-COURSE

Not long after returning to Australia, I had coffee with a local blogger. As we chatted, Sam dropped a bombshell – she was writing an e-course course and thought I should write one too.

I’ll be honest, the idea had crossed my mind before, but it lived in “Someday Land” – meaning I kinda sorta liked it but I was too scared to do anything about it. I tried to change the subject, but Sam asked me (theoretically) if I wrote a course, what would it be about?

I knew right away that I wanted to share what I’ve learned about simple and intentional living; I started to tell her my ideas and as I spoke, I realised I didn’t have a leg to stand on. The only thing holding me back was fear and excuses … so somewhat hesitantly, I agreed.

(To be clear, Sam and I wrote different courses, but we worked together to hold each other accountable.)

Just like that, the next few months of my life were completely turned upside down.

This was definitely a case of leaping and learning on the way down!! I had no idea how much work was involved in writing and promoting a course! I found myself spending every weekend at the library, regular waking up at four in the morning to write, and even pulling a few all-nighters – something I haven’t done since university!

But despite the sleepless nights, the frequent bouts of fear and self-doubt, and pressure to meet deadlines – I’ve never been so happy. It’s the most incredible feeling to create something from nothing and then share it with the world.

And then the feeling when people take their own leap of faith and believe in you?

I feel like my heart has been blown wide open.

Releasing the course has changed how I see myself. Since launching my blog last year, I’ve been afraid to refer to it as anything more than a hobby (although I spend at least 40 hours every week working on it!). Now I have the confidence to stand behind my work and say, “This is me, this is what I do, and it matters.”

To everyone who has supported me so far, thank you so much! ?? And for everyone else, if you’d like to learn more click here for Thrive: Clear the Clutter and Create a Life You Love!

3. I BECAME AN AMBASSADOR FOR ONE GIRL

While I was overseas, I realised one area of my life where my actions were not in line with my intentions was in giving back to the community. As a minimalist, I believe in “people over things” but I started to question how well I was living true to this belief.

Around the same time, I saw a tweet from One Girl – an Australian non-profit with a mission to educate one million girls in Africa by 2020. A friend had introduced me to the charity last year and opened my eyes to the many ways educating a girl can break the cycle of poverty.

In Sierra Leone, girls are more likely to be sexually assaulted than to finish high school – but when you educate a girl everything changes.

I learned that educating girls isn’t about handouts; instead, it’s about empowering girls and giving them the skills to change the lives of future generations.

The tweet was calling for volunteers to join their ambassador program, so at one in the morning, on a warm Mexican night, I filled out the application.

The next day I woke up slightly panicked and wondering what I had gotten myself into. Ambassadors pledge to raise at least $3,000 (enough to educate ten girls) and I wondered if I could really do it.

For the second time in a few short months, I found myself leaping without any idea of what to do, but yet again – I’m slowly learning on the way down (and so far the biggest lesson has that there are a lot of amazing people in the world!!)

I’ll be running several fundraisers in ‘real life’ and online (more details coming soon) but for now if you’re interested in learning more or helping out you can:

Moving forward, my intention plan for October is simple: to be mindful of self-doubt and fear.

I know these are normal emotions and I’m not going to beat myself up for feeling them – especially right now when I’m doing a lot of things outside of my comfort zone – but I don’t want to let these feelings define me or stop me from being true to myself. ??

What about you? Are you doing anything that scares you? What is your #intentionplan for this month? Let me know in the comments! x