I’ll be 35 in a few months and I’m unemployed and homeless.

Last year, I gave up my full time job and my apartment to travel the world. And when I return to Australia later this year, I have no intention of pursuing a career or a permanent address. Instead, I plan to buy a van, do odd jobs, and travel around Australia.

This is my dream and I’m thrilled with my choice, but a few years ago I would have struggled to admit this to anyone.

Because it goes against the status quo. At my age I should be buying a house, getting promoted, or having a baby – or I should at least want to. Admitting that I don’t (at least for now) is scary because I know a lot of people will judge me.

I’ll admit that I’m privileged (in the big scheme of the world) but I don’t think there is anything indulgent about doing what makes you happy. (More people should try it.)

And irresponsible? Well, let’s just say you never know what goes on behind the scenes and I’ll wager that I’m more prepared for the future than many other people my age.

But I digress. I’m sharing my dreams with you today because I now have the confidence to own who I am.

Confidence, or a lack of it, is what keeps so many people from chasing their dreams.

It’s the missing link, the final piece of the puzzle, that we all need to finally take that leap and do what our hearts are urging us to do.

And I found a giant does of confidence in a surprising place – my minimalist lifestyle. 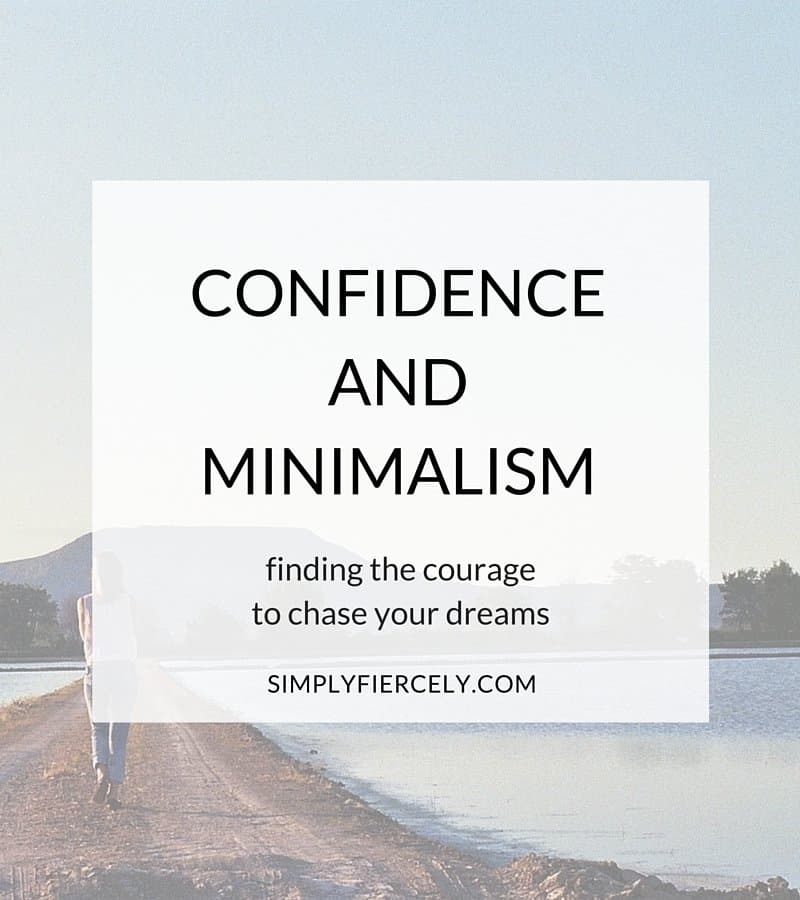 CONSUMERISM IS A MASK

Every time you make a purchase, you’re making a statement about who you are (whether it’s intentional or not.)

(Obviously, the statement you make is subjective, but you get the idea.)

Because of this, we often turn to shopping when we feel insecure.

When I used to feel bad about my weight or my body, I would always buy stilettos – because the towering heels made me feel sexy. Or when I didn’t feel successful enough at work, I’d buy something expensive just to show I could afford it.

Often I wasn’t even worried about what other people were thinking; instead I was trying to prove something to myself.

But really, all I was doing was hiding. My purchases were a mask that kept me from facing my body issues and self doubt.

When I embraced minimalism I no longer had a place to hide, and had no choice but to face my insecurities head on (which led to self acceptance and confidence.)

RELATED POST How I Became a Minimalist: Why I Choose to Live With Less

DECLUTTERING IS ACCEPTING WHO YOU REALLY ARE

If consumerism is a mask, then decluttering is accepting who you really are.

When I downsized my life, I recall being really surprised by the powerful emotions I felt while saying goodbye to my stuff. I’ve spent hours agonising over donating a single dress!

Why all the drama? Why was it so difficult to toss and move on?

Because saying goodbye to my minidresses meant acknowledging I don’t go to nightclubs anymore; selling my blender meant accepting I was not the smoothie drinking green goddess I wanted to be; and donating my sewing machine meant I was never going to design my own wardrobe (much less finish the blouse that I’d been working on for years…)

You get the picture.

When you let go of things you’re saying goodbye to the person you want to be and accepting who you really are.

You also let go of a lot of negative feelings about yourself. I felt a lot of guilt and shame because I wasn’t living up to the lifestyle my stuff was promising; my unworn party dresses would taunt me from my closet when I stayed home on a Saturday night. And my sewing machine? Well – she was nasty.

So when I said goodbye, it was liberating. I started to see all the good things about myself, instead of focusing on my perceived ‘failures’ – another big check in the self confidence box.

BECOMING A MINIMALIST IS A CHALLENGE

Finally, becoming a minimalist gave me confidence because it’s not easy.

Unlearning a lifetime of habits, going against what is ‘normal’ and saying goodbye to your stuff is a challenge and it takes strength and commitment. It’s an accomplishment – like running a marathon or writing a novel and something to be proud of.

When I look back on how far I’ve come, when I remember my overflowing closet (I had over 100 pairs of shoes) and my maxed out credit cards, and then I look at my life now – and I’m blown away.

A few years ago I never, ever would have thought this was possible. But here I am and the pride I feel at having come so far has given me a confidence boost like I never imagined.

Becoming a minimalist is one of the most important things I’ve ever done and it has 100%, hands down, enabled me to chase my dreams and build a life I truly love.

If you’re considering minimalism I strongly encourage you to take the plunge. it might just be the missing link you need to start chasing your dreams.

Have you ever hid behind your purchases? Or shopped for your ideal life (instead of your real life?) And has becoming a minimalist helped your self confidence? Let me know in the comments – I’d love know I’m not alone! x