This is part of a series called Stories of Simple + Intentional Living. I’ll be interviewing people from all walks of life with one thing in common—their desire to live simple and intentional lives!

Today I’m chatting with Charlotte Sapwell. I met Charlotte on Facebook and I was immediately drawn to her—as a single mum with two young boys, she was facing homelessness until she turned her life around by building her own tiny home. Now she’s an advocate working to empower other single mums. Here is her story in her own words.

Hey, my name’s Charlotte. I’m the Mum of two wonderful boys and I want to share a bit of my story. In 2014 I gave birth to my second son and five weeks later my husband left. I was shocked, confused, vulnerable and depressed. Over the next few years, I would spend time focusing on self-love and finding myself again. Then in 2016, I found myself financially struggling and was on the brink of homelessness. I was lucky enough to have an adopted grandfather teach me to build a tiny house in my parents’ backyard by MYSELF. At first, I felt like I had taken a million steps back and saw the return of depression and anxiety. As time and the building went on I found strength, physically and emotionally. I’m now in the happiest (tiniest) place I’ve been in a long time!

Your life changed when you became a single mum to two young boys and—as a stay-at-home mum—you were facing homelessness. Can you tell us a bit more about this period in your life and how you felt?

It was one of the scariest, most depressing times of my life, I felt like a complete failure. Financial struggles can be super embarrassing and having to admit it was so hard, I’m not one to ask for help. I always thought I had to do it alone, I’m a mother they’re supposed to keep a roof over heads, food on the table etc. Instead, there I was feeling like the WORST mother on the planet because my financial situation changed out of the blue and I wasn’t prepared.

Your grandfather came up with an interesting solution to your housing problem–he suggested you transform the old office in your parent’s yard into a tiny 3 x 6 metre home. You didn’t have any DIY skills at the time, so what did you think when he suggested this? And how did you feel about the prospect of living in such a tiny home?

I thought he was crazy, I failed year 9 woodwork and my spice rack was so bad the teacher ended up completing it for me! The size of the house didn’t really bother me the thing that most affected me was going down to a double bed ha.

Tell us a bit about the building process. How much did you do yourself? And how did you know what to do?

I gave everything I go- plumbing, tiling, framing, roofing, electrical you name it I have it a go. I had no idea what I was doing but Rob being a master craftsman knew everything.

Your finished home looks amazing and I’m sure you’re quite confident with tools now, but did you struggle with self-doubt or motivation during the build? (I know I would have with such a big project ahead of me!) If so, how did you deal with it and find the courage to keep going?

I struggled with depression, feeling like a failure/ bad parent was really hard for me but the whole time I knew I couldn’t give up because I have two little boys that were watching their Mum do everything within her power to give them a new home. Some days I wanted to quit, some days I’d just sit and cry but then as the build started to come together I started to be proud of myself, the boys were proud of me and not once did they think I couldn’t do it. Having a reason to keep going and having people believe in me, that’s how I kept going.

What is it like living in a tiny home with two small children? Do you enjoy it? What are the challenges?

I LOVE it, summer is great because you can be outside a lot and living in such a small space you can feel a bit on top of each other. But I’m never too far away if the boys need anything during the night, cleaning takes zero time at all and it’s mine.

It represents how I made my way from rock bottom to feeling extremely empowered and proud!

What have you learned from living in tiny home? Is there any advice you could share with my readers about living in a small space? I’m sure they’d love to hear some minimalist tips!

You don’t need stuff- don’t hold onto things you don’t need or haven’t used in a while. Have organisation, everything is boxed away and in groups so if I need something I know exactly where to find it.

So far we’ve talked a lot about your tiny home experience but from what I’ve read on your social media, this is just the beginning. You’re creating a series called “My Tribe, is Our Tribe”—can you tell us a bit more about it and what it means to you?

This is something I’m super excited about, it’s a new series that talks to single mums and women who I believe are an inspiration. A lot of women don’t understand that they are an inspiration and don’t have to build a house to be inspiring- it might be brushing their hair, a co-parenting success, running a business, taking kids grocery shopping. I believe in every single person and it’s really easy to feel alone like you’re doing a terrible job, that no one feels the way you feel so through the web series I aim to create a place that shows you aren’t alone via positivity, reliability, honesty and inspiration.

I’ve been so lucky to hear a few stories already and wow. I can’t wait to share!

Finally, I’m sure there are a lot of women in a similar situation to yours and they’re not sure what to do next or how they’re going to get through it. Is there any advice you could share to help them?

It gets better, no matter how tough things get never be afraid or embarrassed to ask for help.

I spend my days being inspired and aiming to support single mums alike. Single mums are something special and don’t hear often enough they’re doing a great job. You don’t have to build a house to inspire- you can take the kids grocery shopping, you can brush your hair, sometimes just getting out of bed is inspirational in its self. Remember YOU are something special.

Hello there! I'm Jennifer and welcome to Simply + Fiercely, a community of people striving to live simpler, more intentional lives. As a former shopaholic and workaholic, I know how it feels to live a life that doesn't feel true to what's in your heart. Fortunately, I've transformed my life and gone from feeling cluttered and confused to living a curated life filled with purpose and joy. Now I'm here to help you do the same. 👉🏻 Click here to get started!

READY TO DECLUTTER YOUR CLOSET? 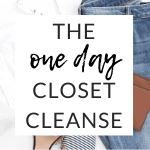