We paused and watched as our guide, Jed, took out his machete and hacked at a small tree on the side of the road. He expertly removed all the branches and handed me the tree before quickly repeating the process.

Mike accepted his and looked at me skeptically. We both looked at the smooth, well worn path ahead of us.

After walking a few minutes, Mike whispered to me, “Do you think it will be rude of me if I get rid of my stick?”

“Yes, hang on to it,” I whispered back (even though I was sure Jed couldn’t under a word we were saying.)

I assumed the walking sticks were simply a way for him to demonstrate his machete skills (something special for the tourists) as they clearly weren’t required for the trek. It wasn’t turning out as adventurous as we’d hoped, but the views were pleasant enough.

A short twenty minutes later, I ate my words. 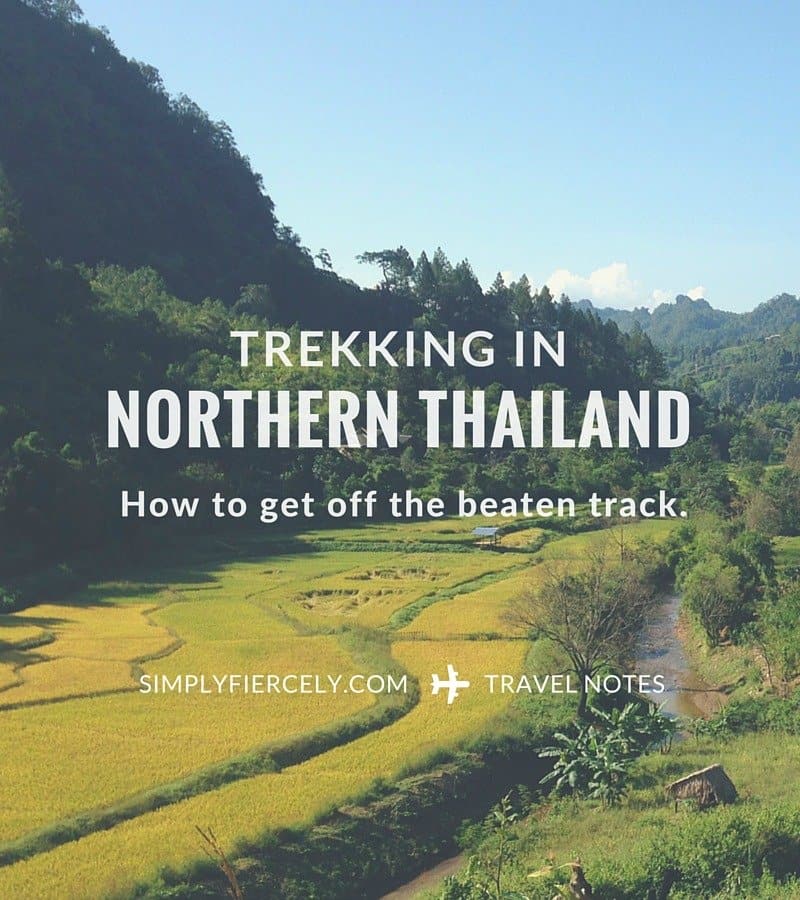 If you saw this post on Instagram, you’ll know we didn’t plan on going to Soppong (sometimes spelled Sappong or referred to as Pangmapha) in the northwest of Thailand, but I’m glad we did.

Initially, we planned to travel from Pai (a hippie stronghold four hours northwest of Chiang Mai) to Mae Hong Son, the provincial capital near the Myanmar border. However, when we arrived at the bus station we noticed the bus to Mae Hong Son went via Soppong.

I didn’t know anything about Soppong, but in my experience the smaller the town, the bigger the adventure, so we made a last minute change of plans.

Actually, two last minute changes; our bus was running late so we found a songthaew (a small truck with seats in the back) heading in the same direction. We climbed aboard (to the surprise of the locals on board) and we were on our way to Soppong!

Our first impressions of Soppong weren’t promising. On the drive we were treated to stunning green valleys around every bend, but Soppong was a dusty, brown, one road town.

“Are you sure you want to stay here?” I asked Mike as we pulled into town.

We climbed out of the truck and looked around. We followed a few signs and in a short time we found the most welcoming guesthouse I’ve ever stayed at and had booked our trek with a friendly local.

But more about that later. For now, back to the jungle.

It turned out Jed’s machete skills went far beyond making walking sticks. A half hour into our trek the well worn track slowly disappeared until we found ourselves deep in the jungle, surrounded by thick bramble.

I looked hesitantly at Mike, a bit worried we’d have to turn around, but Jed calmly pulled out his machete and methodically started clearing a path through the jungle, a foot at a time.

Mike and I were desperately glad for our walking sticks, as we clambered behind Jed, staying close before the jungle swallowed us up.

The track eventually reappeared and we were rewarded with beautiful views across the valley.

This established the rhythm of the next two days – steep trekking followed by stunning views that were always worth the climb. 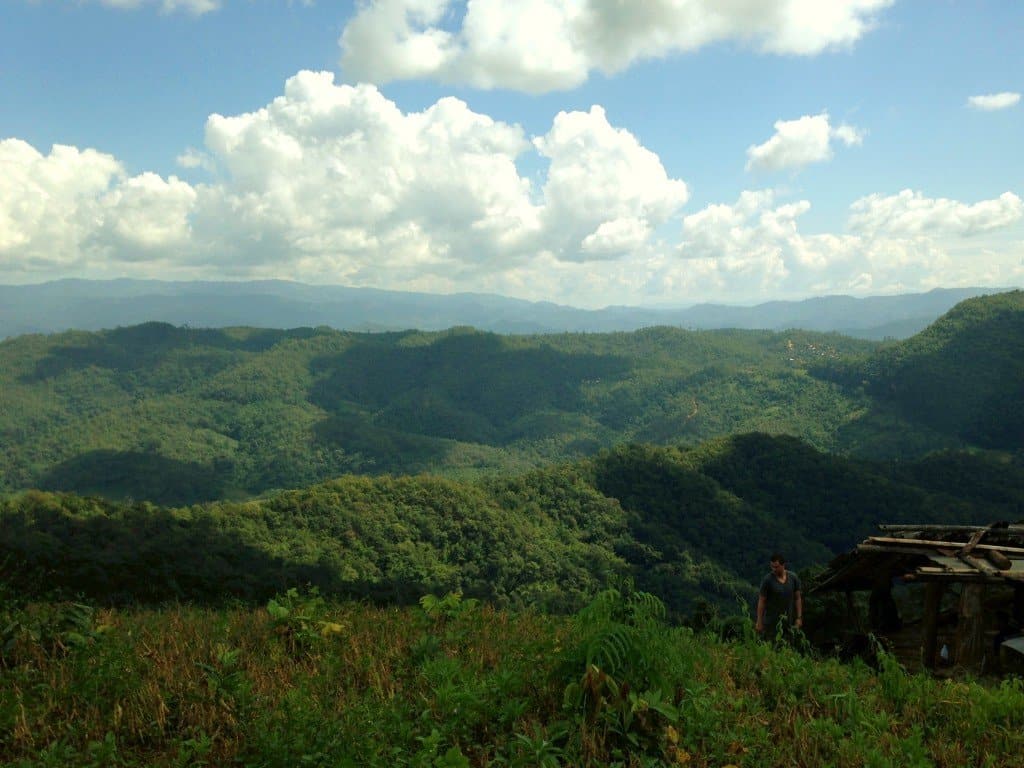 We were walking along a flat bit of dense jungle when Jed indicated it was time to stop for lunch.

Mike and I exchanged glances (yet again.) It didn’t seem like a very comfortable place to stop but Jed ignored our expressions and quickly got to work.

First, he hacked down some large leaves so we’d have a clean spot for our bags, and then he went to work hacking a log with his machete so we’d have somewhere to sit while he prepared lunch.

Once we were comfortable he started a fire and then disappeared into the jungle. A few minutes later he returned towing a long bamboo tree.

In the next fifteen minutes, he proceeded to craft what can only be described as a giant kettle, 3 cups, and a long bowl from the bamboo.

He served us cups of tea, instant noodles (prepared with the bowl he crafted) and a delicious lunch of rice, pork and vegetables he produced from his backpack.

By mid afternoon we arrived in Jed’s village, Mae Lanna, which is one of the most picturesque places I’ve ever visited, set in a deep valley and surrounded by rice paddies. 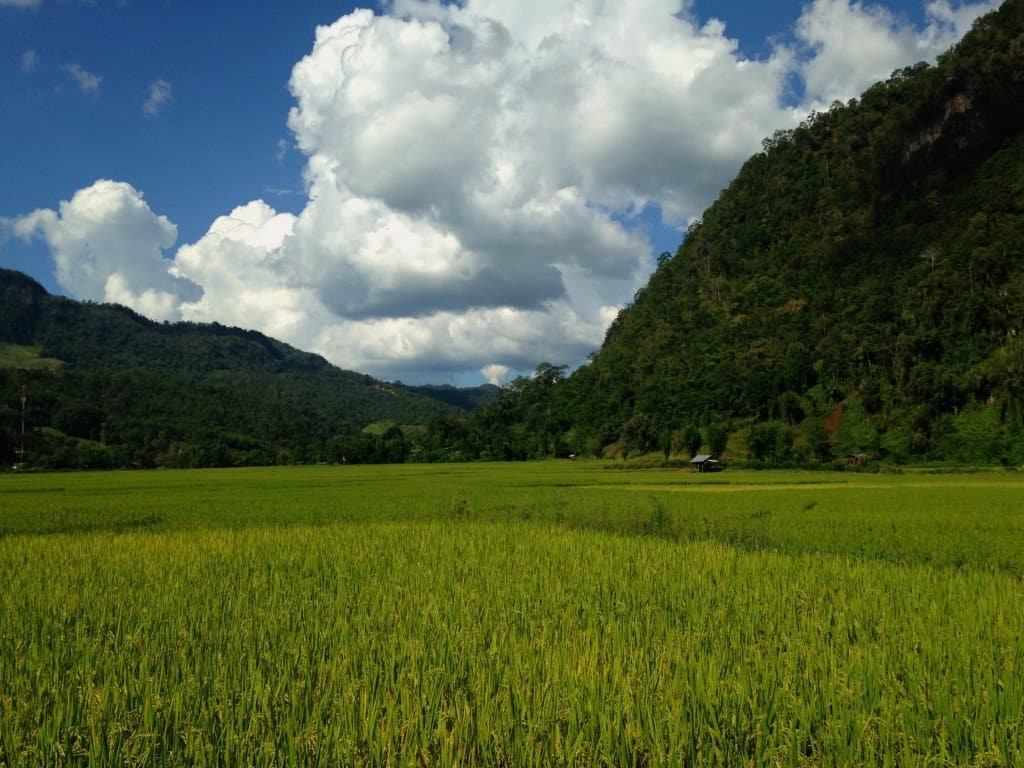 The people of Mae Lanna are from the Shan ethnic group. There was one guesthouse in town and a few homestays, but we didn’t see any other foreigners during our stay.

The locals seemed nonplussed about our presence and no one tried to sell us anything. Although the town had a few caves and I’m sure that some tourists came through the village, it was decidedly ‘un-touristy’. We got a few looks but the people we spoke to were kind and for the most part everyone went about their daily business without paying us much notice.

We stayed in Jed’s home and it was spotless and welcoming. Although Jed and his family weren’t big talkers, I felt instantly at home. After exploring the village, we had a delicious dinner and sat around a campfire with his neighbors eating a sticky rice dessert (not surprisingly, cooked in bamboo.)

I settled down early and had a blissful sleep (the best I’d had in ages!)

The next morning we woke to delicious coffee and breakfast, before heading off on another day of trekking (again mostly uphill.)

But again, it was completely worth it. It was a beautiful day, warm but not too hot (fortunately November is the start of the cool season.) We were well fed, well rested and having an amazing time.

We continued up hills, down valleys, and at the end we were greeted by the most spectacular views of the trek.

HOW TO GET OFF THE BEATEN TRACK: WHY YOU SHOULD TREK FROM SOPPONG

This trek has been the absolute highlight of our trip so far and if you are considering doing trekking in Northern Thailand, I highly recommend you consider booking a trip from Soppong.

First of all, the trek cost us 800 baht per person, per day (3200 baht total) and included everything (transport, drinking water, amazing food, and accommodation.) This is considerably less than the prices we’ve seen in Pai or Mae Hong Son; even so, without the middlemen I feel confident that more of the money is going to locals.

Secondly, we’ve heard horror stories of trekking in Northern Thailand – of visiting ‘tourist’ villages where the ethnic tribes are exploited and tourists are harassed constantly into buying local goods.

I don’t have any firsthand experience with these treks in Thailand, but I can say this trek was nothing like that. Although we are obviously tourists (let’s not try and pretend otherwise), we feel like what we saw in the village was a slice of real Shan life – not a show put on to entertain us.

We didn’t see another foreigner for two days and considering we had to whack our way through the jungle, it was definitely an ‘off the beaten path’ experience!

THE DETAILS: HOW TO BOOK YOUR OWN TREK FROM SOPPONG

There is a daily local bus to Soppong from either Pai or Mae Hong Song. The bus is slow but comfortable (when you see how windy the roads are you’ll understand why slow is better.) The cost is about 50 baht.

You can also travel by Songthaew like we did. I believe it comes every other day in each direction around roughly the same time (and price) as the bus, but it can be hit or miss (so have a back up plan.) There are minibuses as well for a bit more.

Alternatively, many people travel by motorbike as part of the Mae Hong Son loop but the roads are windy with a lot of steep blind corners, so make sure you are comfortable and experienced on a bike first.

We highly recommend the Jungle Guesthouse, which is 300 meters from the bus station. (With your back to the bus station, go left. The entrance to the guesthouse is up a long driveway across from the police station.)

The huts are clean, cheap (250 baht a night), and basic (squat toilets and cold showers.) However they are set in a lovely garden oasis (you won’t believe the dusty main road is a few minutes away) and the owner, Da, is hands down the most hospitable person I’ve ever met.

She speaks very good English, she always asks about your day or offers you oranges from her orchard, and she makes amazing meals. You really feel like Da is looking after you and welcoming you in her home.

HOW TO BOOK A TREK

Back on the main road, between the Jungle Guesthouse and the bus station, you’ll see the below sign for tours and treks.

Inside the agency you’ll find Toy, who speaks very good English and loves to laugh. We felt he was honest and he treated us with a lot of respect and kindness. We’d definitely recommend you book with him (although to be honest we didn’t see any other options in town!)

We’ve been told that January and February are the busiest months, but I feel fairly confident that at anytime you could just show up without booking in advance.

WHAT ELSE IS THERE TO DO IN SOPPONG?

You can hire motorbikes from the second Castrol sign (nearest to the Jungle guesthouse.) There is no sign but Da can point you in the right direction if you can’t find it. The cost is 250 baht a day.

On our free day we biked the Mae Lanna motorbike loop (yes we went to Mae Lanna twice, but it was so beautiful it was worth it!) We did the loop on Da’s recommendation but (scroll down the ‘Do’ section) is a better guide.

A word of warning, there track does get a bit tough at sections, so this isn’t recommended for novice riders or if it has recently rained. And don’t miss the right hand turn on the ridge – the sign isn’t in English so we missed it and nearly got very lost (luckily a friendly local found us.)

Not far from Soppong is the Tham Lot Cave. We missed it and I’m kicking myself because it looks spectacular. (Boo hoo!)

I hope you’ve enjoyed the story of my trek! Have you done trekking in Northern Thailand? I’d love to hear your experiences. Let me know in the comments! x

All photos by me except for the 2nd image of the Songthaew (by Ilya Plekhanov) // Used with permission.