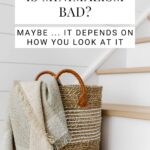 Is minimalism bad? The short answer is … maybe. Like everything in life, there are nuances, and it depends on how you look at it.

For those who are new to Simply + Fiercely—hello! My name is Jennifer, and I’ve been living a minimalist lifestyle for over a decade now. As a former shopaholic and workaholic, it’s been a pretty massive shift.

But is minimalism right for everyone? What are the downsides and can minimalism be “bad” for you?

My experience has been overwhelmingly positive, but I believe in offering a balanced perspective, so my honest answer is …maybe. As with many things, it all depends on your approach. Keep reading if you want to learn more.

What Are The Downsides Of Minimalism?

First, let’s sum up the most common criticisms of minimalism:

Is there some truth to this? Possibly. Let’s look at each one individually.

Some people in the minimalist community believe minimalism is about living with as few things as possible. They preach that you shouldn’t keep anything “just in case” because you can just pop down to the shops and repurchase it later.

Personally, I think the people who genuinely believe this represent a small minority of minimalists. But yes—that view of minimalism is very elitist. Not everyone has that kind of financial security. Most people have to balance the desire to own less with the practicalities of … you know, having a budget and bills to pay!

But here’s the thing: I don’t believe that minimalism is about living with as little as possible.

Instead, I believe the minimalist lifestyle is about alignment. You have to find that sweet spot between “too much” and “not enough”, and that’s a line in the sand that will look different for everyone.

It was Peter Walsh who said, “Clutter is not just stuff on the floor—it’s anything that stands between you and the life you want to be living.” So let’s think about how that applies to our lives.

Buying laundry detergent in bulk when it’s on sale is not clutter because I like saving money and having clean clothes. On the other hand, a closet full of clothes that I never wear is clutter because I feel sick with guilt every time I look at them (even if I might theoretically wear them one day).

This is what feels right for me—although you better believe I’ll keep my favourite jeans if I gain a few kilos. At least for a little while because jeans are expensive.

All this to say that I don’t think minimalism is elitist when you subscribe to the belief that “how much” is personal. It’s not about judging others for what they own. Instead, it’s about looking inwards and asking, “What feels right for me?”

Is minimalism is bad for the environment?

I think that minimalism can be bad for the environment if you take a half-hearted approach.

After all, it’s easy to toss something in a black bag, drop it off at Goodwill, and wipe your hands of it. Your home is clutter-free and then next time you want something, just declutter something else. As long as you follow the “one in, one out” rule, you’re good, right?

Not really. This type of minimalism isn’t great for the earth—and it’s not great for you either.

Why? Because you won’t experience the true benefits of minimalism if you’re stuck in a cycle of shopping and decluttering. You might have less stuff in your home, but do you have more time, money and energy? Probably not.

This is why I take a different approach to minimalism and decluttering. Getting rid of clutter is part of it, but what matters more is what you learn in the process.

When you make these questions a part of your decluttering, you become a more conscious consumer. I can guarantee you’ll buy less stuff moving forward, which can only be good for the environment.

And by the way, I’m not saying that buying things is terrible, but you want to be intentional with your purchases.

Related Post: Why Your Life is Busy + Cluttered (Plus What to Do About It)

Is minimalism bad for the economy?

So if we’re buying less stuff, what happens to the economy?

If you’re wondering this, then odds are you’re confusing minimalist living with frugal living. The two lifestyles go hand-in-hand for some people, but minimalism does not always lead to spending less.

Trust me—I am doing my part to keep the economy alive and healthy! I spend big on experiences, travel and food. These industries play an important role, and they’ve been hit hard these past few years.

Of course, I’m not an economist, and I don’t know what would happen if everyone decided to be a minimalist, but I think it’s safe to say that we’re not there yet. If I choose to be a bit more purposeful with my spending, I’m sure that Target will survive.

I’m more worried about individuals and families that are stuck, drowning in a sea of too much stuff and too many responsibilities, and struggling to come up for air.

Related Post: How I Became a Minimalist: My Story of Living with Less

Right now, minimalism is popular. People love the minimalist aesthetic, and they’re attracted to a minimalist life—probably in response to the stress and overwhelm. It’s calm and soothing, and I get that.

But let’s also remember that the minimalism I write about, and the minimalism I live in my day-to-day life, is not “one size fits all”. There are no rules; you can love colours, be wild, ambitious, passionate—whatever you want out of life, you can have it.

Minimalism does not mean living a boring life. Instead, it’s about getting rid of things that ARE boring (aka clutter) so that you have room for magic, wonder, and all the wonderful things that make you feel alive.

So nope. Minimalism is not boring to me. Instead, it’s the key to a rich and fulfilling life, whatever that means to you.

Minimalism Is For Everyone

Ultimately—if you let go of the labels, trends, and controversy—the minimalism I love is about being true to yourself. I had enough of trying to do everything and please everyone.

I just wanted to find my way back home, to who I am and what I want, underneath all the crap weighing me down. And I think everyone can get on board with that.

If this resonates with you, here are a few stories and resources that will help you get started:

What do you think? Is minimalism bad? Let us know in the comments!

14 thoughts on “Is Minimalism Bad? Maybe … It Depends How You Look At It”