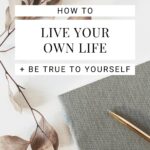 Do you ever feel like you’re so caught up trying to make everyone happy that you’ve forgotten how to live your own life? Instead of being true to yourself, you do what you’re “supposed” to do … and now it’s like a part of you is lost.

I’ve been there, and I’ve got the scars to prove it! But you know what? Life really is too short. If you’re ready to live to the fullest (without the weight of everyone’s expectations), then here are some helpful suggestions to get started.

What Does It Mean To Live Your Own Life?

When I talk about living your own life, I mean having the courage to follow your heart—and by definition, this will look different for different people.

Sometimes, it means going all in and taking big, bold action towards seemingly impossible dreams. But other times, it’s a quiet act of rebellion, like saying ‘no’ and staying home with a cup of tea.

Being true to yourself might mean being open, honest and vulnerable. You risk embarrassment or rejection, but at least you don’t have to live “what if” or “what could have been”.

It’s not about perfection or always getting everything you want, but it is about taking a quiet moment to listen to the sound of your own voice before it’s lost in the roar of the crowd.

5 Ways to Start Living Your Own Life

One of the most important things I’ve learned over the years is that no one is going to give me permission to live my life. If I want to change something, friends and loved ones can advise me—but ultimately, I have to take ownership of my decisions.

This isn’t about taking an idealistic view of the world, where everyone can get what they want just by working hard enough (because that’s not true). But it is about being honest with yourself, knowing when you’re getting in your own way, and taking action even if no one else believes in you.

2. Realise you will never please everyone

Logically, we all know this, right? In the words of Dita Von Teese:

“You can be the ripest, juiciest peach in the world, and there’s still going to be somebody who hates peaches.”

But despite this knowledge, I know how hard it is to disappoint people or to face criticism—even when you know that what you’re doing is best for you. We want approval because it makes us feel safe, and when we don’t get it, it’s normal to feel scared or uncertain.

When this happens, I handle these feelings by spending time reflecting on my values and priorities in life. The more connected I feel to what matters, the easier it is for me to gain perspective.

Another tip that helps is to put words to the sacrifices you make when you put other people’s needs before yours. Sometimes you need to see it all spelled out before it hits home.

3. Know that it’s impossible to live a fulfilling life without getting hurt

When I was younger, I used to think that I could outrun my feelings. I travelled a lot, and when I wasn’t travelling, I kept busy working and shopping. After a difficult childhood, I wanted nothing more than to avoid painful emotions.

But here’s the thing: I learned that when you avoid emotions, you miss out on the good AND the bad. For me, it felt like I was living on autopilot. I could avoid feeling hurt, but I know that I missed out on a lot of joy as well.

As Dr Susan David would say, I had “dead people goals”—because “Only dead people never get unwanted or inconvenienced by their feelings.” (This is a quote from her TED Talk, which I highly recommend watching.)

I know it’s not easy, but putting myself out there and risking hurt, failure, and disappointment has led to some of the greatest joys in my life.

For a long time, I assumed that I knew what I wanted out of life—but in reality, I’d never really taken time to think about it. Instead, I was chasing a vague idea of success heavily influenced by the people and world that I saw all around me.

I’d lost touch with myself, which is why I never felt satisfied. It didn’t matter how hard I worked or how many things I acquired. It never felt like ‘enough’ because I didn’t know what ‘enough’ meant to me.

Fortunately, I’ve since learned that I’m not alone, and I don’t believe that self-awareness comes naturally for most people. Instead, it takes time, space and intentional effort to get to know ourselves again.

I think that living true to yourself is a process, and it’s definitely not something that you do once and then tick off your to-do list!

Instead, it’s about trial and error, experimenting, having fun, getting messy, and taking chances! We have to acknowledge that we don’t know everything and believe in our hearts that it’s OK to be wrong.

Embrace a beginner’s mind and be curious. Do more things because they interest you, without obsessing over the outcome. There is no ‘failure’ because you’re learning about yourself, your values, your dreams—all the things that make you tick!

You’re also figuring out how to make it happen. We can learn from others, but ultimately, we have to test everything. There are a million ways to get from point A to point B, and it’s often more about the journey than the destination. Don’t stop searching for the path that fits you best, even if you get lost a few times along the way.

If you want to learn more about being true to yourself, here are some additional blog posts that you might find helpful:

Do you feel like you’re living your own life? If not, what’s one thing you could do today to get started? Let us know in the comments!