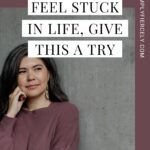 Try this simple tip whenever you feel stuck in life. It just might create the perspective you need to move forward.

When my daughter was two, she suddenly went through a phase where she would scream at bedtime unless my husband or I sat with her until she fell asleep.

Of course, I’m pretty sure this is normal for a lot of kids, so we didn’t think much of it. Instead, we just sat there every night and waited, trapped on the floor in the dark.

Yes, it was a bit frustrating to be stuck—but that’s just life, right? Months passed, and nothing changed.

Then one night, I had to escape to use the toilet. I left the door open and went to the bathroom, and when I came back, she was sleeping.

We quickly realised that she didn’t need us sitting there every night—at least, not anymore. She just wanted to fall asleep with the door open. We never had to sit with her at bedtime again.

Now, I don’t know when this shift happened. Maybe if I had tried to leave the night before, she would have cried for me to come back.

But maybe not. Maybe if I had tried something different earlier (instead of just assuming she still needed us), we could have saved ourselves months of long, boring evenings on the floor.

I’m not telling you this to share parenting advice. (Trust me—if there’s one thing I’ll never write about on the Internet, it’s kids and sleep!)

But I can’t help but feel that there is a lesson here for everyone.

In what ways are you stuck in a toddler’s bedroom, wasting your precious time and energy, when really you could just get up and walk out the door?

Why Do We Feel Stuck?

There are many reasons we feel stuck in life, and I’m not here to deny the reality of anyone’s circumstance. There are bills to pay, people to care for, and everything in-between. Sometimes our responsibilities can leave us feeling stuck and overwhelmed by life.

But at the same time, it’s also true that we keep ourselves stuck by making assumptions about what is or isn’t possible.

Let’s take your to-do list, for example. There are probably a lot of things that you “have to do,”—but do you really?

In a culture where (on some level) we take pride in how much we can juggle, this can be a loaded question. I know that if someone had asked me this 15 years ago, I would have responded defensively:

And that’s true. But if I’m honest, and I reflect on my past without the resentment or desperation I used to feel about proving myself, then I can see that this attitude was holding me back.

I was so unbelievably stubborn, and I didn’t want to admit that I was keeping myself stuck by making things harder than they needed to be.

Related Post: How To Get Your Life Together When You Feel Out Of Control

How to Get Unstuck

So what should I have done instead?

Sometimes we feel stuck in life because we’re weighed down by chains …. never realising that we already hold the key to freedom.

Is it possible that some of the things on your to-do list were important once, but they’re just not necessary anymore? If we look back at the story about my daughter’s sleep, I’m sure that she did need me to stay with her that first night, but at some point, it changed.

I don’t know because I never challenged what I accepted to be true. I just kept doing the same thing every night because, at that moment, it felt easier.

And to be clear—that’s OK sometimes! We can (and should) choose to do what’s easier when it’s what we need to survive.

But eventually, the tides shift. We feel stuck and frustrated, but unless we question what has become habitual or routine, we’ll never know what else is possible.

How is all of this eating away at your time and energy, holding you back from doing the things you most want to be doing with your life? (And if you don’t know what you want to be doing, is it possible that you’re just too busy to figure it out?)

Of course, not everything is up for debate. There’s a lot on your to-do list that genuinely belongs there. But how can you know for sure if you don’t challenge your assumptions?

And it’s not just your to-do list. Think about your relationships, boundaries, home, finances, and so much more. In what ways are you stuck only because you haven’t tried to change?

I have spent so many years of my life stuck—stuck in relationships, stuck in jobs I hated, stuck in debt, stuck drowning in my clutter—because I assumed that change would be too hard.

But time and again, life would push me to the limits, and I learned that when you’re backed in a corner, you leap even when you have no faith that things will work out.

The job I couldn’t quit because I’d never find anything better? The relationship I couldn’t end because it would hurt too many people? The compulsive shopping habit I couldn’t change because it was just too hard?

It wasn’t easy or quick—but eventually, I proved all of my assumptions wrong. And while I trust the timing of my life and try to live without regrets, I can help but wonder what would have happened if I had acted earlier.

Instead of staying stuck in my fears and doubts for so long, maybe all I had to do was get up and walk out the door.

Related Post: When Life Gets Hard: 6 Things Your Soul Needs to Hear

I believe that life comes in seasons, and some are harder than others.

Sometimes we just need to be patient, like when we’re caring for loved ones or just starting out with our careers. We feel stuck because we want to be somewhere else, but it’s just not time yet.

But other times, a season has ended, and another is waiting—but you’ll never know unless you get up and test the waters.

Challenge your assumptions, and if it feels hard, start small:

Maybe it won’t go well, and then you’ll deal with the fallout. Or maybe you’ll find that this is your chance to get unstuck and finally move forward. You’ll never know unless you try.

Resources to help you get unstuck

I don’t have all the answers, but here are a few blog posts that might help you with your next step.

Have you ever felt stuck because you assumed something was true … only to find out it wasn’t the case at all? Let us know in the comments!

1 thought on “When You Feel Stuck In Life, This Tip Will Help You Move Forward”