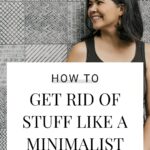 Drowning in clutter? Wondering how to get rid of stuff? Wishing it would all just disappear? Keep reading because I’ve been there, and I can help.

I can remember a time when I’d walk around my house, just wishing I could get rid of everything. Everything. I just wanted it gone so I could start over.

A clean slate, and maybe some room to breathe …

If you know that feeling, you also know that no magic decluttering fairy is coming to your rescue. Instead, we have to roll up our sleeves and do the hard work of getting rid of stuff ourselves.

But don’t worry. As a former shopaholic turned minimalist, I have a lot of experience with managing clutter. Here are some tips for getting rid of stuff you no longer need, so you can create space for more of what matters.

Why is it so hard for me to get rid of stuff?

For example, think about your closet. If you don’t know your personal style, how will you decide what to keep? You feel drawn to everything “just in case”, and it’s like trying to pack for a holiday when you have no idea what the weather will be. Everything feels important.

But when you know your style, it’s like having a forecast you can depend on. You know what you need and, perhaps more importantly, what you don’t.

A lack of clarity is something that almost everyone battles, but it isn’t the only challenge. Sometimes we also struggle with:

These thoughts and beliefs make it hard to let go, even when we’re drowning in stuff and desperate for space.

Want to simplify your personal style? Try dressing with a personal uniform.

How do I force myself to get rid of something?

So how do you “force” yourself to let go? Well, in my experience, you don’t.

I’ve tried it; I used to think that to get rid of stuff, you need self-control and discipline. I just had to be a bit tougher and get on with it.

It works for a while, but here’s what I learned. When you bully yourself into decluttering, it’s like going on a binge diet. You might make a bit of progress, but it doesn’t last, and it feels like crap.

Forcing yourself doesn’t work. Instead, I found a compassionate approach to be considerably more effective. Here are the three steps I recommend to everyone.

How do you get rid of stuff in your house?

1. Get clear about what you want

In the words of Stephen Covey, you should “begin with the end in mind”. This means thinking about what you want to achieve before you start decluttering.

For example, let’s say that you’re cleaning out your hall closet.

Before you start randomly going through things, take a few minutes to think about what you’re trying to achieve. Think about form and function. It might sound silly, but how can your hall closet make your life easier?

It’s also helpful to think about what you’re going to do with that stuff you’re getting rid of (but more on that later).

2. Evaluate your stuff against your goals

One thing people struggle with is knowing what to throw away and what to keep. But when you start with the end in mind, you have a compass to guide you.

Going back to the hall closet example, let’s assume that you’ve got lots of winter clothes (scarves, gloves, beanies, etc.) in various sizes for your kids.

You might be tempted to keep everything “just in case you need it”, but if your ultimate goal is helping your kids get dressed without tearing the closet apart, then you have to consider the tradeoffs.

Less stress and overwhelm in the morning in exchange for getting rid of a few things? Or keeping everything, dealing with the mess, and potentially replacing things later?

There’s no right or wrong answer. You’ve got to weigh up the alternatives and decide what’s best for you. But make sure you’re looking at the big picture—we tend to focus on what we risk by letting go while downplaying the potential benefit.

Weigh up your options, and then take intentional action by getting rid of stuff that doesn’t support your goals.

Tip: One thing that helps me is to get specific about how much is enough. Kids lose things, so it’s OK to keep spare gloves—but is one pair enough? Or two? Decide once, set clear boundaries, and then stick to them.

3. Practice compassionate curiosity and get to the heart of your struggles

When you know what you want to get rid of but you just can’t let go, it’s usually a sign of something deeper.

The things we own often reflect our fears, doubts, and regrets—and letting go is hard until we make peace with the past. This is the real secret to getting rid of stuff. It’s uncomfortable work (which is why we feel so tempted to just hang onto things), but in the long run, it will get you further than any decluttering hack.

What to do with stuff I’m getting rid of?

One bonus tip: it’s a lot easier to get rid of stuff when you know what you’re going to do with it. Decluttering can be overwhelming, but you can make things easier by creating a plan.

Do some research about selling, recycling and donating. Be realistic about the time and energy you have available, and then make a decision once about what to do.

Once you’ve decided, stop second-guessing yourself. I know a lot of people feel guilty about wasted money and resources, but the waste has already happened. Make a decision, learn from the past, and move forward. Storing useless stuff that you’ll never use in your home isn’t solving anything.

Ultimately, getting rid of stuff takes time, and I know how easy it is to feel overwhelmed by clutter. So just remember, it’s OK to start small. One step at a time—and if you want more support, subscribe to get my free Mindful Decluttering guide.