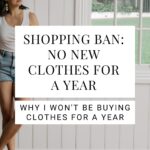 Could you go one year without buying any clothes?

This is a question I found myself asking last October.

It’s not because I own too much. As a minimalist, I know I have a pretty small wardrobe. Nothing too extreme—I still enjoy clothes—but it’s a far cry from how I lived in my twenties.

Back then, I easily owned over a hundred pairs of shoes and turned my entire guest room into a custom walk-in closet. I also shopped at least five times a week.

A lot had changed since then but, if I’m honest, I had to admit that I was still buying more than I needed. Every month or so, a handful of new things would find their way into my closet.

I had no trouble decluttering a few times a year, so it never felt like my closet was getting bigger. But that’s not really the point, is it?

I was still buying things I didn’t really need or sometimes even want. My closet looked “minimalist”, but I was wasting time, money and energy when I knew I could do better.

So I decided to do a little experiment: a ‘No New Clothes For a Year’ Challenge.

Being a blogger, my first instinct was to hop online and immediately share my decision. But then I realised I needed some time to process what I was doing, why I was doing it, and how I felt before writing about it.

But here we are—nearly six months later—and I think it’s time for an update! If you’re curious about my shopping ban and why I won’t be buying clothes for a year, keep reading to learn more.

Why a shopping ban on clothes?

As I already mentioned, I wanted to change my shopping habits. I was buying more than I needed, and I wanted to see if I could stop.

But why now? And why a shopping ban?

Those who know me well know that a ban on anything is out of character for me. It might surprise some of you to hear this, but I have very little willpower. I’m a touch self-indulgent, and I hate making myself do things I don’t really want to do.

And that’s what makes this shopping ban so interesting for me. Sure, I’m referring to it as a challenge because it’s easier to explain this way—but it didn’t start as a “challenge”.

Instead, it felt like a natural response to a surprising thought …

On the 28th of October last year, I clicked ‘add to cart’ on two dresses that I’d been thinking about buying for years. They arrived a few days later, and I was thrilled with my purchases.

I can remember hanging them in my closet, taking a step back, and looking at all my clothes with satisfaction. I sighed, and a thought popped in my head—

It was loud and clear but also completely foreign. Even as a minimalist, I’ve always felt the need for something more in my closet; something to upgrade, something to add … just one more thing and then I’d be done.

But for the first time ever, that feeling was gone. Somehow, I’d crossed that mythical finish line that had seemed out of reach for so long.

Still, I didn’t quite trust myself. I decided to attempt a shopping ban, just to see what I was capable of, but I didn’t tell anyone. I was sure that I’d change my mind after a few weeks.

But as time passed, I felt more and more comfortable with my decision—and here we are, six months later.

What are the rules of your ‘No New Clothes’ challenge?

When I decided to try a ‘No New Clothes’ challenge, I obviously decided to stop buying clothes. But I knew from the start there would be a few exceptions, so here are the rules I set for myself:

First, if something changes and I can’t comfortably fit my clothes, then I will buy what I need with no guilt, shame or regret.

This challenge is about making peace with enough, and it has nothing to do with suffering. I’m not going to squeeze my body into clothes that don’t fit to win some arbitrary game where I write the rules.

Having said that, this hasn’t been an issue for me so far. My body shape and size have fluctuated a lot in the past five years (two kids will do that to you), so I’ve gotten used to it.

My current wardrobe is built around comfortable clothes that are very forgiving. Still, I know the option is there, and I’m not afraid to buy more if I need it.

I also decided ahead of time to allow for two further exceptions to the ban—first, underwear. I knew I needed more, and, as I’ve said, this isn’t about depriving myself of things I genuinely need!

I’ve also been thinking about buying a pair of black ankle boots for years, and honestly, I’ll probably still hold off. But on the off chance that I find the perfect pair somewhere (I’m very picky), I’ve given myself permission to go ahead with this intentional purchase.

Note: I’ve seen a few ‘No New Clothes’ challenges that are all about shopping secondhand, which is obviously a great thing! But this challenge is about being content with what I already own, so I’m not buying any clothes (exceptions listed above), secondhand or not.

What has the shopping ban been like so far?

Surprisingly, it’s been very easy! I’ve only been tempted a few times, and in each case, it’s been when I’ve seen something I already love on sale.

For example, those two dresses that I bought back in October? I adore them, and I must admit, I was very tempted by a massive Black Friday sale. (Surely one more wouldn’t hurt, right?)

I almost made an exception, but then I came back to the thought that started this whole thing in the first place. I really do have enough.

That was back in November, and since then, it’s been easier. In the start, I would look at my favourite brands on Instagram or allow myself to browse my favourite shops.

But since then, that sense of having ‘enough’ has only grown; it feels less like a thought and more like a fact. Most of the time, I don’t even feel the urge to browse because I genuinely don’t need anything.

All of this might come across a bit smug, but honestly, I still feel surprised about it. Part of me thinks my brain is pulling a prank, and I’ll wake up tomorrow feeling completely different.

I think that’s why I’ve held off on publicly talking about my shopping ban for so long. Deep down, a part of me still doesn’t trust what I feel because it just doesn’t seem real to be OK with not needing more.

I guess only time will tell. But for now, I can honestly say I haven’t bought anything (clothes or shoes) in six months, and it hasn’t felt like a challenge at all.

What happens after the year is up?

Currently, I plan to end my shopping ban on Black Friday this year, which will technically mean no shopping for almost 14 months.

I chose this date because I was sure I’d have a long wishlist after not buying clothes for so long, and Black Friday would be a good excuse for a mini-shopping spree. Well deserved after a year, right?

But now, I’m not sure. Except for the black ankle boots (which I’ve been thinking about buying for at least five years but keep holding off because I’m so picky), I actually don’t have anything on my shopping list.

It’s still early, and I’m taking things a day at a time, but right now, I don’t think I’ll end the challenge with a big shopping spree. Instead, I am cautiously optimistic that this is the start of a new way of shopping and consuming.

Regardless, I think I’ve learned a lot about the power of deciding how much is enough and creating space to test our theories to see just what we’re capable of.

Before you start a clothes shopping ban

If you’re thinking about attempting your own shopping ban, I highly recommend you start by creating a personal uniform and decluttering your closet.

Decluttering might sound like a strange starting point if you’re thinking about not buying anything new. After all, you want options so you can “shop your closet”, right?

But here’s the thing I’ve learned about options, clothes, and shopping: sometimes wanting variety is just an excuse for not knowing your style. You want options because you’re not clear about what you like, which only leads to more shopping.

You don’t need more options to stop shopping. Instead, you need more clarity and fewer choices. Figure out what you genuinely love wearing, and then wear it all the time.

For me, this has been the secret to genuinely feeling like I have “enough”.

The One Day Closet Cleanse will help you declutter your closet and build a wardrobe you truly love—without the stress and overwhelm.

Resources for your clothes shopping ban

As a shopaholic turned minimalist, I’ve written extensively on how to stop shopping and create a minimalist wardrobe. Here are some popular posts you might find helpful with your shopping ban:

You can also follow me on Instagram, where I’ll be sharing more updates on my No New Clothes Challenge!

Could you go a year without buying new clothes? Let us know in the comments! x

8 thoughts on “No New Clothes Challenge: I Won’t Be Buying Clothes For a Year”